Another 15th of the month and a chance to show what's flowering in my Plymouth garden for Garden Blogger's Blooms Day.

We've had a very wet, but also quite mild winter.  That, combined with some fine, sunny and - for the time of year - quite warm weather has really brought out some early spring flowers.  Even my Magnolia 'Raspberry Ice' has been hurried into opening its buds - though the main display is still a few days away.  Even the few flowers that are open look better against a bright blue sky after the leaden heavens that have been commoner this year.

Stars of the show are the camellias.  Rather than just show closeups of the flowers I thought I'd show them in context this time round.  This is 'Donation' in the front garden, part of a mixed planting of Phormium 'Tricolor' and Rhododendron 'Wilbrit'. 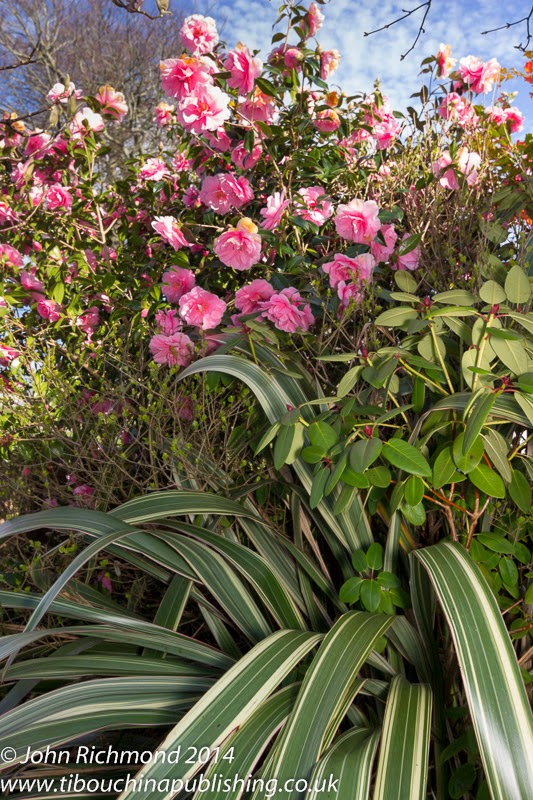 By the front door 'St Ewe' overtops my ever increasing shrub of the variegated Pieris 'Flaming Silver', also in flower at this time of year. 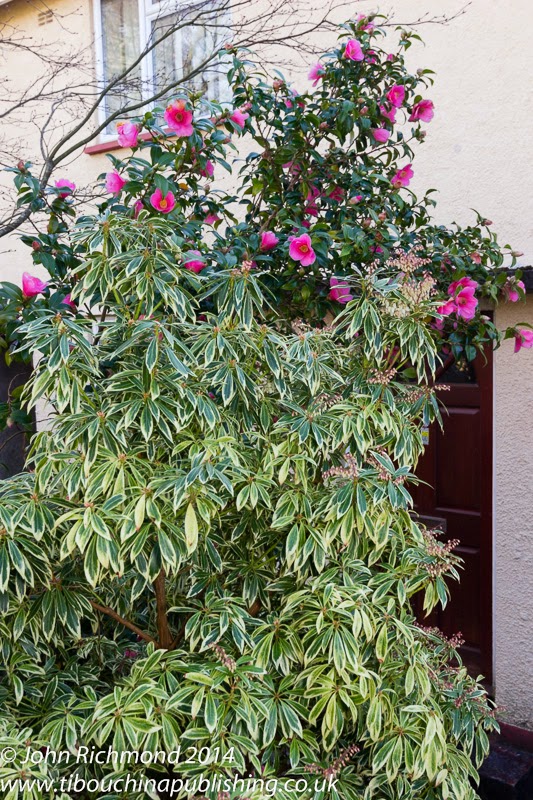 In the rear garden 'Cornish Snow' is putting on its usual show of single white flowers, petals crumpled as though they had only just got up.

'Anticipation', also in the rear garden, is not making much of a show this year.  So, I'll have to break my promise and just show a single bloom.

At ground level I remembered to cut my epimediums back this year.  Often I forget and the first flowers emerge among the wreckage of last years rather tatty leaves.  There is only one in flower at the moment - but it's very welcome.

Clematis cirrhosa 'Freckles', my multi hued collection of semi wild primroses, and Ranunculus ficaria 'Brazen Hussy' are showing one or two flowers but are not as interesting as the ones above.  However three bulbs are producing some additional colour.

Pale blue Muscari armenaicum 'Valerie Finnis' I much prefer to the commonplace dark blue grape hyacinth that seems to be in every garden around me.  It's just beginning to open.  Another few days and it will be in full flower.

Erythronium 'Pagoda' has flowered early this year.  It's normally the beginning of April.  Slow to increase, eventually I'll have a large clump.  I hope.

Finally, I mentioned last year that my plant of the South African corm, Chasmanthe bicolor, had flowered for the first time in a few years.  It's done even better this year.  I potted some of my corms up into a large tub and there are flowers emerging on a good many of the individual plants.  Half-hardy, this one, the foliage being winter green and requiring mild conditions to get  through.  Unusual rather than spectacular, the individual flowers with their purple stamens are still very interesting and a pretty thing to finish off on.

As ever, my thanks to May Dreams Gardens for hosting the Garden Bloggers' Bloom Day meme.  Head over there to see what's flowering in many more gardens round the world.
Posted by Trainer John at 8:29 PM 5 comments:


There are some plants so exotic that flowering is always an occasion for a little celebration.  So it is with Strelitzia reginae, the South African native bird of paradise plant.  My indoor specimen has flowered in the kitchen, benefiting from the low angled sun streaming through the window to keep it healthy over the winter.

Flowering is a fascinating process.  I saw the flower stems begin slowly to emerge just before Christmas.  Lengthening seemed to take forever but, finally, a week or so ago the tip bent over as the terminal bract developed, fattened, and, a few days later the first flower emerged.  This bit is fast (in plant terms).  It's almost like they are spring loaded, bouncing out and snapping into perfect form in quick time.
Five days later the second flower emerged.  My kitchen has a curious lack of sunbird pollinators so the first flower - orange back petals and two fused blue-purple petals that sheath the stamen - has remained in good condition as the second has emerged.  The effect is like the feathered crown of a crane.

With about six flowers per bract the spike should last about 3-4 weeks.  There are two more spikes to follow so I should have flower well into April.

Out of flower the leaves - as befits a member of the same family as bananas and heliconias - are attractive, forming clumps of broad paddles.  You can see part of one in the third, portrait picture below.

They are just about hardy in the very mildest parts of South West England.  I've got another one outside, in a large pot, hard under the south facing house wall, and protected by fleece on frosty nights.  It really needs a cool greenhouse - but mine is no longer, smashed by gales a couple of years back and not replaced.  It hasn't flowered outside - but then I did overpot it, never a good idea with plants that prefer to be root bound to flower well.

I'd like to say that I grew my indoor plant from seed and nurtured it through the long years it takes to reach flowering maturity.  The truth is I was given the plant last September by a work colleague of Maria's.  A gift for which I'm very grateful.