The bananas are back

A couple of weeks of unseasonal warmth for the end of March has really accelerated the new spring growth in the garden.  It has helped that the winter now, hopefully, over was shorter and milder than the previous three years - but even so, this year looks like being advanced in its seasons.  And it has certainly brought the bananas back to life a little earlier than I expected.

I grow three.  The 'hardy' banana Musa basjoo; the red abyssinian banana Ensete ventricosum 'Maurelii'; and the Chinese dwarf banana, Musella lasiocarpa.  All were new last year, replacements for older plants I lost over the previous two winters.  All three have survived last winter.  With protection.  I've learned a good deal since my more optimistic exotic gardening days of a few years ago.  Fortunately, all three are readily and cheaply available as summer bedding plants thanks to tissue culture propagation techniques so replacement wasn't too painful.  Even so, they'll be far larger and do far better in their second year so successful overwintering is a definite bonus

Musa basjoo spent last summer in a large pot.  I only bought it in July so it didn't really have a chance to get going before autumn and then winter slowed growth.  We had one bad week in early February when I had to provide some in situ protection but it has stayed outside all winter long.  I find that the fleshy stems will take about -5 or -6C before terminally succumbing to frost though well established clumps can regenerate from the roots after even lower temperatures.   For ultimate height, though, you do need to protect the stems from year to year.  I never did with my old clump and the 2009-2010 winter finished it off.  Though not before it got to this size:

Sadly this was the peak of it's growth.  My neighbours had removed a good deal of hedging and tall shrubbery which deprived the clump of wind protection.  The foliage never looked good and the clump was declining in vigour even before harsh winter weather finished it off.

Now I'm starting again. So it was a relief to lop the dry, blackened top third of my single stemmed plant to reveal an intact growing point.  Two weeks later and growth is evident.

Now to find a well manured, sunny spot out of the wind for the explosion of summer growth.

Ensete ventricosum 'Maurelii' must be one of the most spectacular perennials that can be grown in cool temperate climates.  Even as a young plant it oozes exotica.  This was mine after four months growth last year:

The standard advice is to grow the plant in full sun.  Mine was in the shade of my camellia / chusquea / cordyline dividing 'wall' in the middle of the garden.  It thrived.  I don't think I've seen better colours on this plant, sumptuous wine red undersides to the paddle shaped leaves, dark bronzed upper sides.  It looked spectacular.

Overwintering consisted of digging up the plant with a small rootball, draining off the water that collects in the leaf bases by inverting it for a couple of days and then standing it upright in a tiny pot in the corner of my little shade house.  When the weather got frosty I moved it inside - then out again when conditions eased.  Here's the pot.  It's only for support.

It started regrowing about three weeks ago.  This is how it looked today: 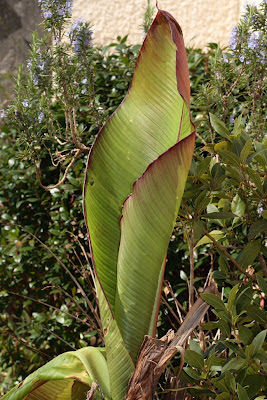 Growth is astonishingly fast.  It's now too big for the spot I had it last year - but I've got another spot picked out.  Not in shade this time.

The final one of my bananas is Musella lasiocarpa.  Again, I've grown it before and lost it to the unexpected harsh winter of 2009 - 2010.  So I couldn't resist a very cut price end of season specimen in one of my local DIY sheds last Autumn.  This overwintered unprotected and is now sprouting again.  No pictures of this one yet - but I'll take some in the summer when I expect it to be an interesting part of my display.
Posted by Trainer John at 3:32 PM 2 comments:

How brief the blossom

I love magnolias.  Descended from one of the earliest types of flowering plants their giant blooms are very primitive biologically but gorgeous aesthetically.  In a small garden I only have room for one, a hybrid called 'Raspberry Ice'.  After a dozen years (and one move which set it back for a while) it's now about 12ft / 4 metres high and carrying ever greater quantities of flowers for it's brief spring blooming.  It started in flower late last week, was at it's best Monday and Tuesday of this week but the flowers are now shattering, accelerated in their decline by some unusually warm weather and a persistent wind. 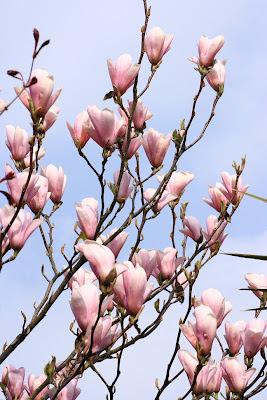