I have a liking for ginger lilies, Hedychium species and varieties, though the size of a well grown clump compared to the space I have available precludes me from growing more than a few.  In UK conditions many are perfectly hardy, either dying down naturally or being cut down by frost to tough, winter hardy rhizomes which are often late to emerge the following spring but make up for it with swift growth of tall stems clothed with long, strap like leaves.  What they are not so good at is reliable flowering in our cool summer conditions.  But there are some exceptions.

In my small collection the earliest to flower is always Hedychium densiflorum 'Stephen'.  Naturally deciduous, hardy - though it did suffer in the recent harsh winters but has bounced back strongly - tall - to 5ft / 150cm or more - and with broad, exotic leaves well spaced up the pseudostem, it fits in well with my tropical style of gardening.

Collected by Tony Schilling in Nepal, 'Stephen' (and the similar 'Sorung' from a later collection) are atypical of the species and its other varieties in that both the terminal flower head and the whole plant are far larger.  Compare these two photos:

The flower heads of H.densiflorum 'Assam Orange' are thinner and little more than half the height of the 10in / 25cm heads of 'Stephen'.  In a garden setting, although the colouring of H.densiflorum is attractive, it's a far less desirable plant (unless you are a collector rather than a selector).  With limited space, I made my choice and 'Stephen' has fulfilled the mandate for a tall, tropical looking perennial with exotic flowers.

Here it is in my own garden.  I don't have room for a massive clump so I periodically have to split the rhizomes to keep it in bounds.  Nonetheless, the effect is what I wanted - even if there is nothing visible until late May. 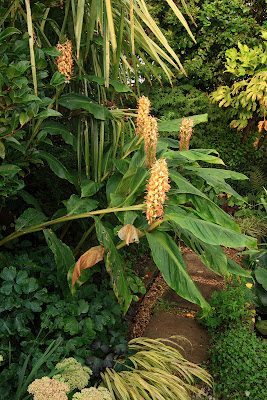 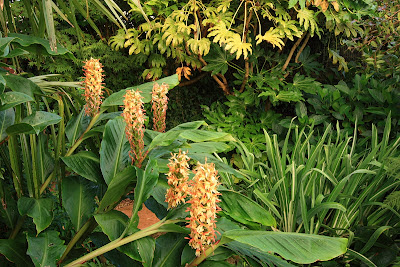 There is, of course, a fly in the ointment.  Individual flowers are ephemeral, lasting a couple of days at most.  They have a sweet scent, particularly in the evening, that readily attracts pollinators and so they soon pass over.  The head opens flowers progressively from the base to the tip but the whole thing is fleeting.  Five or six days from first opening to final decay is typical.  There is a small variation in the time that the heads develop but don't expect the entire flowering to last longer than a fortnight.  But it's worth it - and if the autumn is warm enough I often get one or two new flowering stems before winter interrupts and the plants cycle down for their dormant season.  I even get the odd scarlet seed - though not recently, so no photos I'm afraid.