Nothing in a garden is ever permanent.  Plants may grow - but they also die.  I've lost a well established Phoenix canariensis, the Canary Island Date Palm.  January 2010 was harsh in Plymouth.  A couple of weeks of sub zero temperatures with persistent frost and snow saw it off.  I looked for recovery all summer but no new spears were in evidence.  It could have been resting – there was still green on the badly battered fronds.  But, finally, the recent really low temperatures have crushed my remaining hopes.
Even in the relative warmth of Devon or Cornwall these are always going to be marginal plants.  There are a few larger specimens in very favoured gardens but these are isolated survivors, protected by their individual micro-climates against the hard winters we do get down here every ten years or so.  In recent years, emboldened by the run of warmer winters, lots of young plants have been sited in local gardens.  I bought two small (cheap) specimens in 2003.  One perished early on.  The other thrived - to the extent I was beginning to worry about it taking over a part the garden.  I had, of course put it too close to the house wall and the fronds were reaching to over ten foot (3 metres) before winter struck and removed that problem.
Growth was a little slow at first - perfectly normal for this palm - but, once it got it's roots down it accelerated very nicely.  The photo below shows the growth between 2005 and 2007 - quite impressive for only 3 years in a cool climate where the growing season is relatively short.
By the summer of 2009 it was even larger - quite a feature in a small garden.  There is nothing quite like the effect a pinnate fronded palm has in creating a more exotic, sub tropical air.  Now it's gone.  Which means I've got to dig it out - and the remains are pretty hefty.
Posted by Trainer John at 8:10 PM No comments:

So thats what the name means

Dryopteris erythrosora - translated from the botanical Latin means oak fern with red sori (the spore capsules on the frond undersides).  I'd never given the name much thought.  I grow it in open shade where it makes a nice upright, semi-evergreen, fronded fern with the distinct advantage that young foliage in late spring is a pleasing red bronze shade, very attractive in the garden setting.  But my plant has always been in a position where I look down on it so don't really notice the sori coming to maturity.  It took a chance gust of wind at exactly the right time to realise how apt the name was. 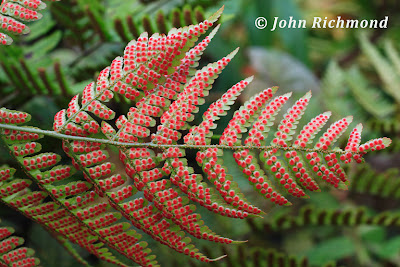 Red sori - just like it says on the label.
Posted by Trainer John at 9:49 PM No comments:

One of the joys of working in the South West peninsula is the chance to walk out of whichever office I'm working in (I move around a lot) and do a little nature photography during whatever lunchtime I can snatch.  I photographed these lichens on an old gatepost when down near Bodmin in Cornwall.  The predominant one is Parmelia caperata, whose flat fronds are starting to engulf the wood of the gate, but there are also a number of little tufts of the more frondose Ramalina farinacea.  I enjoy photographing these miniature slices of natural life. 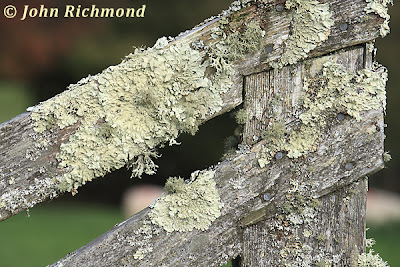 These were handheld shots using the Canon 55-250mm IS lens on my Canon 400D.  I'll take my tripod and macro lens next time I'm in the area to get a slightly better resolution.  Having said that it's not too bad - especially in the full sized version.
Posted by Trainer John at 11:16 PM No comments: