We've had some odd weather over the last fortnight.  Odd for Plymouth, that is.  Cold and dry, with winds from the east, not cool and wet with winds from the south-west.  Although we have managed to avoid the ice and snow that have hit more northern and eastern parts of the UK its the dryness that has been the problem.  I've even had to water a few of my outside pots.  And my Dicksonia antarctica tree fern.  Always a bit risky when temperatures can still drop below freezing at night.

But it is essential.  At this time of year the new fronds are a mass of tightly coiled, hairy, brown constructions in the centre of the previous year's fronds.  If they freeze hard, they die.  But if they dry out they also die.  Providing the apical meristem, buried deeply at the top of the tree fern 'trunk', survives, new fronds will develop and thrust their way through the remains.  But you'll lose the early flush for that year - and it's usually the best one.

So, some mornings, when the temperature edges up to around 4-5C or slightly more, the centre gets a soaking.  So that this....

will develop to this....


...and flush to produce another year's shuttlecock of fronds.

The display should be better this year.  Winter has been mild enough (fingers tightly crossed) that last year's fronds are still green and healthy.  Which means the head will be even more impressive than it has been for the last couple of years when frost has crisped the older fronds.
Posted by Trainer John at 9:30 PM 1 comment:

Another 15th of the month, another report on what's in flower on this day.

The garden may be pregnant with possibility but, even though the days are lengthening and it's not too cold - about 9C at the moment - it is still winter.  I don't have the space to have a lot of winter flowering plants so I don't concentrate on them.  But there are still a few in the garden and even the sparsest blooming is worthy of note.

About one winter in three Pelargoniums, the bright summer geraniums, survive the winter unprotected outside.  I used some red, star flowered ones in a window box last year and they are still producing the odd flower, undaunted by a few minor frosts.  They'll look better in the summer.

Normally I'd have three or four of my camellias in flower  by mid February but only one, Camellia 'Cornish Snow' is in full flower, the 8ft/2.3m tall shrub studded with the paper white blossoms.  I do enjoy this one for it's sheer exuberance of flowering - though it's difficult to get a good photo as wind and rain mark the blossoms very readily.

'St Ewe' is also normally early in flower but this year I've had one solitary flower open so far - and that's well hidden in the shrub so I can't photograph it.  But, to judge by the state of the buds it'll be well adorned by next week.

Primroses, Primula vulgaris, seed themselves around in the garden.  They're a UK native and very common in the local area.  In another month shady hedgebanks will have carpets of them but for now I've a good many self sown yellow forms already producing their first flowers.  Later, there will be red, pink and white forms - but not yet, not this year.

Sarcococca humilis is still producing it's whispy but strongly scented little white flowers on the bush in the front garden...
...while Mahonia japonica is still going strong after two months flowering.

I illustrated a couple of hellebores I've got in a sunnier spot in my previous post.  This is what happens in a shadier spot when a mild winter allows my slugs and snails to survive.

Other than those, Clematis cirrhosa 'Freckles' is in flower - but then there are few months when it isn't.  The same could be said about my two abutilons, 'Patrick Synge' and 'Waltz' but, with only three flowers between the two plants - and those rather tatty -  they can hardly be said to be floriforous at this time of year.  So, I'll mention but not illustrate them.  Outside the kitchen door, rosemary is in flower on the few flowering shoots left after regular trimming to adorn roast lamb joints.  As for my spring bulbs, well, the best that can be said is that they are sulking.  Even the early crocuses haven't come into flower yet - and may well pass over before next month's Garden Blogger's Bloom Day (or be eaten by my slugs and snails).

As always, my thanks to May Dreams Gardens for hosting the Garden Bloggers' Bloom Day meme.  Head over there to see what's flowering in many more gardens round the world.

Although winter is far from over there are definite signs of spring in the garden and locally.

I've had frogspawn in the little pond for about a fortnight now:

To one side of the pond Camellia 'Cornish Snow' is flowering well:

Hellebores are producing their lovely flowers: 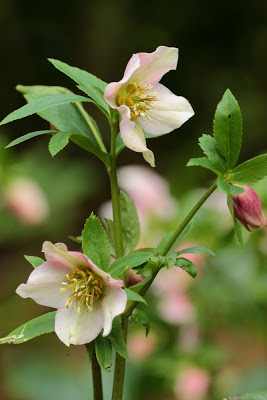 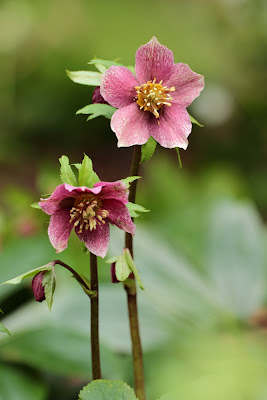 Snowdrops were looking a picture when I visited Saltram House late last week:

As were their Welsh daffodils, Narcissus pseudonarcissus:

And on Dartmoor the hardy little native ponies were grazing on fresh grass rather than dry, winter withered vegetation: 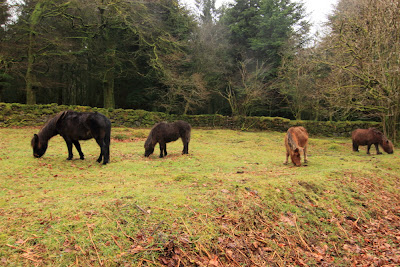 Spring is on its way - which means I'd better get on with a clear up!