The sedum is flowering - and with it comes the bees

I have a good many plants that attract pollinating insects into the garden but in early September none are as attractive to the local bee populations as Sedum spectabile.  For the last couple of sunny days I've taken some time to sit by my little clump and record the comings and goings of my neighbourhood bees, attracted by the abundant nectar in the myriad of individual pink flowers that make up the heads of this semi-succulent plant.  There were rather more than I would have thought.

Bear in mind that despite my training as an ecologist I'm not a bee expert so all identifications are tentative.  If I've got any wrong please let me know and I'll edit the post to suit.  As always, click to embiggen the photos.

Honeybees, Apis mellifera, came in their dozens.  Some were the normal lighter coloured form, others the darker bodied form.  There must be at least two hives locally though I've no idea where they are.


I had quite a few visits from the common carder bee, Bombus pascuorum, one of the bumble bee family.  This is a ground nester, with up to 150 offspring from the overwintered queen over the course of the summer.  Given the brightness of the orange hairs hasn't faded, the two photos below are probably end of season, newly hatched queens stocking up for winter and the chance to produce their own nests next year.  There are enough undisturbed spots in my own and other local gardens to provide nesting sites.


Another member of the bumble bee family made a couple of appearences.  Given the lemony colour and the white tip to the abdomen I believe this one is Bombus lucorum though it could be the very similar Bombus terrestris.  As I said, I'm no expert, so feel free to correct me if I'm wrong.


I also spotted a red tailed bumble bee, Bombus lapidarius, but it was gone before I had the chance to photograph it.  No stock photos, I'm afraid, but I'll update if I take one.

Far smaller than the honeybees and bumble bees were a couple of little solitary bees. Lasioglossum species.  These are tiny little things, less than 1cm / 0.4in long - and a challenge to photograph. I use a diffused flash mounted on an articulated bracket so that the flash head sits just in front of my Tamron 90mm macro lens (+25mm extension tube in this case) to give soft, shadowless lighting.  Focusing is manual.  Essentially I set the macro lens to full extension and then slowly lean in to get the shot and fire when the subject comes in to focus.  Easier said than done as the hands and body shake and the insect moves around.  A lot of shots are failures, usually because I haven't nailed the focus exactly.  Thank goodness for digital SLRs - I'd never have been able to afford the film costs back in the days when I shot with Olympus OM cameras and Fujichrome slide film.

Anyway, back to the bees.  I've tentatively identified the one below as a male Lasioglossum calceatum, one of the commonest species in the UK.


I'm definitely not sure about this next one.  It could be a heavily striped male Lasioglossum calceatum or it could be the far scarcer Lasioglossum xanthopus.  Either way, it's a pretty little thing and I'm happy to see it feeding on the sedum. 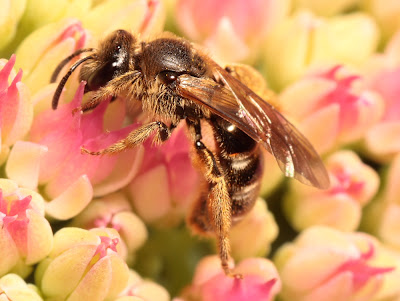 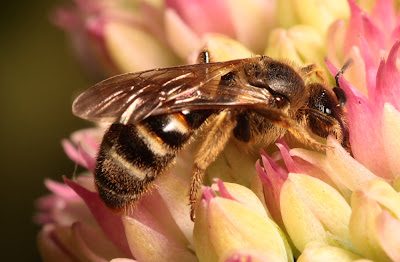 Of course, where there is prey, there are predators.  The bees may be attracted to the flowers to feed but down below the flower heads, spinning their rather tatty webs were a number of Linyphia triangularis spiders.  Too small to tackle a honey or bumble bee they would certainly make a meal of the little solitary bees should they blunder into the webs.  Nature is often cruel.


It is sometimes said that ornamental gardens aren't places for wildlife.  Nothing could be further from the truth.  Providing that pesticides are not used (or at least very sparingly) even a more exotic garden can attract a variety of wildlife.  It may be small - but it's there.