It's been a couple of weeks since I last posted so I thought I'd break the drought by posting some general garden shots to show how things are developing at the end of July / beginning of August.  We've had some sun, a lot of rain and a fair bit of wind so things are looking both lush and battered.

I'm starting with a couple of shots taken from my upstairs windows.  It gives a good impression of the section of the rear garden closest to the house and puts some of my other posts in context.  As always, click to embiggen.


The red flower is Crocosmia 'Lucifer' - I still have far too much for the balance of the garden.  Soon to be remedied.

Coming back to ground level, the next set are of plantings around the central gravel circle. 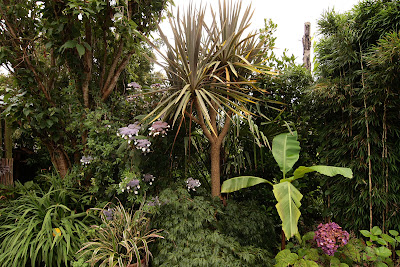 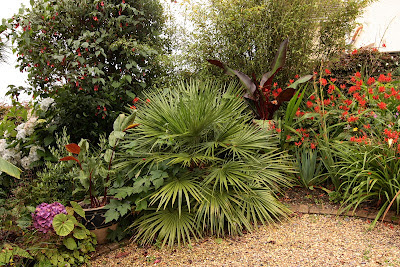 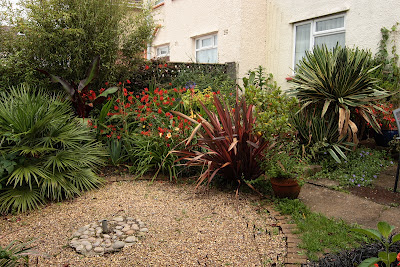 Not quite a panoramic view but it will give a feeling for the plantings in here.  I've plans for a few changes for next year though the structural plants will remain.

Hidden behind the Cordyline / bamboo screen is my little pool garden.  This has really come on since I refurbished it last year.

14 months can make quite a difference in gardening terms - even when most of the larger plants were present beforehand.

Just for fun I thought I'd try my hand at a more aerial shot.  No convenient upper story windows here so the shot was taken by attaching the camera and wide angle lens to a monopod, hoisting this as far up as I could (about 10ft/ 3metres) and triggering the shots using a wired remote.  Not the easiest thing in the world - so I won't show all the failures.  But it's an interesting technique and allows me to show the crown of my Dicksonia antarctica tree fern in front of Camellia 'Cornish Snow'.  The large leaved plant on the left is Hedychium 'Stephen'.  This should be in flower in the next couple of weeks.

The pathway between the top part of the rear garden and the pool garden hasn't quite gelled yet.  I need to do some replanting in there - but at least the little shade house is looking colourful at this time of year.  I seem to be building a collection of begonias - no bad thing, they do like the mild, humid conditions in there.

Unfortunately my 'red' border isn't living up to my hopes.  It doesn't help that it's in shade till mid afternoon but the weather has been unkind to the rose 'Summer Song' that should be forming a centrepiece.  No matter, there is always next year.