Unlike many gardeners further North and East in the UK my cordylines have survived the winter.  By survived I mean that the trunk and top growth is still intact.  But we only went down to minus 8C here on the Dartmoor side of Plymouth, not the minus 10C to minus 15C recorded by other gardeners in the UK.  Penny plain Cordyline australis in the front garden has come through without a problem.  It's only flowered twice so hasn't started branching to any extent - and my neglect left it with an insulating skirt of old, dead leaves around most of the stem.  Twopenny coloured "Coffee Cream" in the rear garden, a lightly bronze leaved selection is now, after 14 years, a multi headed specimen.  I've lost the odd branch but not the whole lot.

In an odd way I'm a bit disappointed.  Cordylines are common down here in the South West, adding height to many a garden.  With uninterrupted growth they flower after a few years - and then branch to produce two, occasionally three growing points.  Each year's flowering throws another set of branching.  Older plants that have been undamaged by frost have a head of multiple branches and a relatively short single trunk.  They still look good - but they could look better.

Frost, icy winds or carelessly wielded chain saws can remove the top growth entirely.  No problem for the cordyline.   Nodules on the roots spring into growth and soon develop new stems.  Backed by the mature root system of the parent these head skywards at a pretty reasonable pace.  Not just one - but multiple trunks develop.  And, because of the speed of growth, they can get a long way into the air before flowering and branching.  Multiple stems which gracefully arch away from each other, lots of clean trunk before the first branches, the end result is elegant height in any garden.

Which brings me back to "Coffee Cream".  I've had to cut away two branches which have shuffled off this mortal coil - but that still leaves me with about eight branches.  They look awful.  The terminal buds have survived intact and are now pushing out new growth.  But it's not the clean, elegant growth of undamaged plants, it's growth that has had to force itself through a confining corset of frost damaged foliage and is. in consequence, a little twisted.  Foliage that is now begining to die off, yellowing but still clinging stubbornly to the branches - and still needed to generate energy to fuel the new growth.  This is the second year in succession that I've had the problem.  A good growing season and a mild winter will cure its ills - but deep inside me is that soft seductive voice that is suggesting that if only I'd lost the lot I could be growing a multi stemmed plant that, in a few years time, would be its equal in height, and far more attractive.

But I don't have the courage to cut it off at the roots.  Maybe we'll have an even harsher winter next year to solve my problem.  In the meantime I'll have to live with this for the next few months. 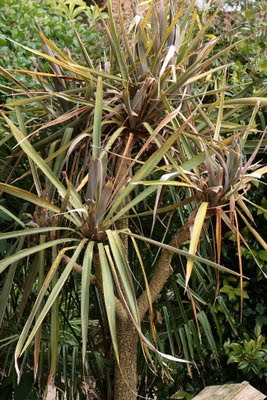 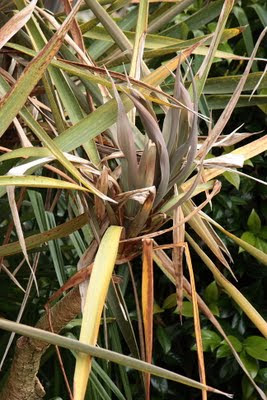