I have a good deal of shade in the garden.  In part it's my habit of growing a lot of taller plants - the jungle look - and needing to then furnish the understory.  In part it's the situation.  My front garden is shaded for most of the year by the high walls of the house, I have shady spots along the east boundary and to the North of a combination of Prunus 'Amanogawa', Hydrangea aspera ssp sargentiana, Trachycarpus fortunei, Cordyline 'Coffee Cream', Camelllia 'Anticipation', and Chusquea coulou which forms a dividing green wall across the rear garden.  Which means I grow a good many shade loving or shade tolerant plants (the two things are different - as I'll explain in another blog post).

Which gives the opportunity for some interesting combinations.  I photographed this little group this afternoon.  It's rained on and off all day so everything was looking very lush. 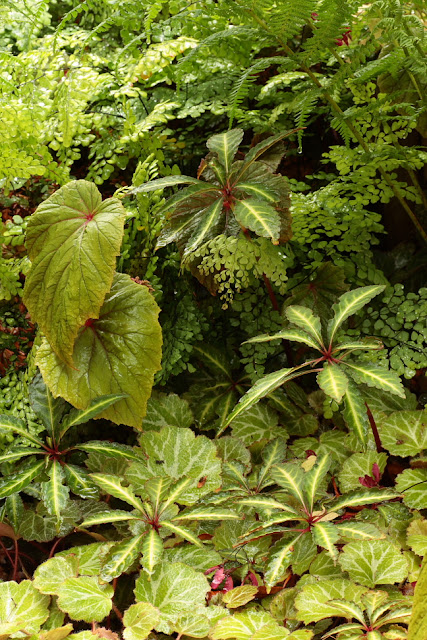 The leaves in the top half of the shot that look like they belong to a houseplant maidenhair fern are a maidenhair fern.  Specifically the hardy maidenhair, Adiantum venustum.  This is a gorgeous little plant, pretty nearly evergreen with me (although last winter tested it's tolerance).  It's quite a spreader in a small, understated way.  I have to constantly watch that it doesn't swamp some of my other shade lovers.

The leaves that look like a white striped starfish are Impatiens omeiana.  I now have two populations of this.  It spread both sides of my original planting - and died out in the middle.  I can now expect to see the individual stalks with their rosette of leaves popping up anywhere within a small section of the front garden terraces.

Underplanting it all, with rounded leaves striated with white veining, is a refugee houseplant.  Saxifraga stolonifera is far hardier than you might imagine.  It also spreads quite well, so much so that I'm now needing to remove quite a lot of it so I can get some new plantings in.

Finally, I get the hardiest of all the begonias, Begonia grandis ssp evansiana, seeding itself around the garden.  That's the largest leaves to the left of the photo - though you're not seeing their full beauty as they have bright red undersides.  I say seeding but it employs a method of  vegetative propagation that is found in other begonias.  In the autumn - if we've had a good year - every leaf axil carries a small bulbil that, when the foliage dies back as the nights grow longer, drop to rest over the winter.  In spring the survivors sprout and soon produce new plants.  In the meantime the parents have retreated to frost resistent tubers over the winter but soon produce new foliage in late spring.  I've ended up with a rather too large collection and must harden my heart and weed out a few - although they are fabulous underplanting in a jungle type garden.

One photo, four small scale garden thugs - but together they combine to provide a lovely picture.
Posted by Trainer John at 11:10 PM