How fast do Dicksonia tree ferns grow in the UK?

I have two tree ferns in the garden.  One Dicksonia antarctica, one D.fibrosa.  Having said that, the D.fibrosa has not yet re-emerged from it's winter defoliation so I may have lost it.  It was only small, a cheap purchase from Morrison's supermarket a couple of years back.

Dicksonia antarctica, on the other hand, came through last winter in good shape.  All the top growth was completely frosted but the trunk and new croziers survived -8C without protection.  I've  had this one for about 9 years now.  I bought it a as a tattered baby, no trunk, half a dozen fronds, discarded in an end of season garden centre sale.  £2 it cost me.  It's now considerably larger.

How much larger became fairly obvious when I cleared the dead fronds earlier this year.  It's managed about 32in /  81cm of trunk growth in 9 years.  In it's early years it wouldn't have made much growth so a better measure is gained by comparing these two photos.  The first I took in June 2007, the other this morning.


Roughly reckoning it's made about 22 in / 55cm of trunk growth in 4 years.  Not too bad for a tree fern that's often quoted as growing 1 in / 2.5cm per year.  OK, a sample of 1 is hardly statistically significant.  Add to that the fact that I live in a generally mild, moist area of the UK and it could be said that the growth rate is unnaturally high.  However, the plant is in a fairly exposed position, not cossetted in damp, sheltered woodland, and needs daily watering in drier weather - which should slow it down a bit.  So maybe 5-6in / 12-15cm a year isn't a bad estimate.  Which has two implications.  Firstly, if it survives I should be able to celebrate my 70th birthday under a crown of fronds that start more than 6 ft / 180cm above the ground.  Secondly, it's possible that some of the venerable plants in Cornish valley gardens aren't quite as old as everyone thinks.

Here's a photo of the whole plant.  The fronds are still unrolling so it's not quite at full extension and, with the loss of last years growth, the head isn't as full as it will hopefully be by late summer. 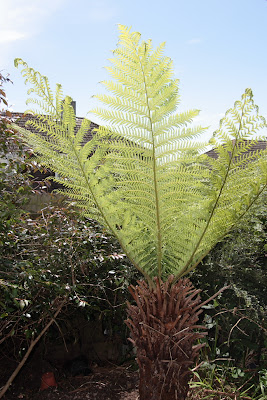 It's in an area of the garden that I'm now busily renovating - but it will be one of the centrepieces in the finished layout.

Yes, I could have bought a trunked plant, unrooted or rooted.  But I didn't have the money.  At around £40 per foot a 4 ft plant (the extra would be needed for planting to ensure stability) was beyond my plant buying budget at that time.  It still is.
Posted by Trainer John at 2:28 PM