Years ago we built an aviary in the rear garden.  The north wall was the wall of the garden shed, the east wall a single fencing panel, the other two walls open meshwork.  The roof was corrugated plastic sheeting.  The floor is paving.  The whole is only 120cm deep, 150cm wide but 2 metres plus high.  It's now pretty shady after the garden trees have matured.

The aviary fell out of use, I opened up the west wall and, for two or three years, we used it as a dumping ground for pots, old garden furniture and other junk.  It may have been tucked out of the way but it was an eyesore, even though Akebia quinata had threaded itself through the mesh and was hanging from the rafters.

Earlier this year I decided to do something about it.  I disposed of everything I could (there is still a wormery and some pots in there). I had a homemade wooden, 120 x 60cm bench rescued from my old, wind wrecked greenhouse.  It fitted.  I had somewhere to house a collection of shade loving pot plants.  Rather than use hardy plants I decided to set up a summer home for tropical house plants.  In a way it's an experiment to test to see what would be happy in a cool, shaded, breezy area with overhead cover.  Here's the results: 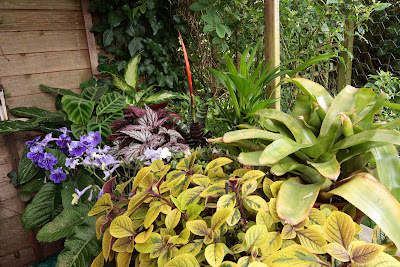 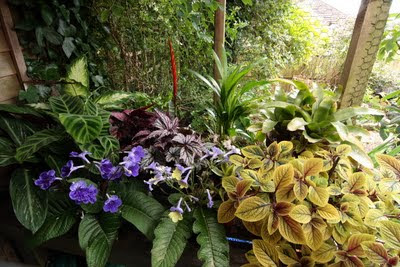 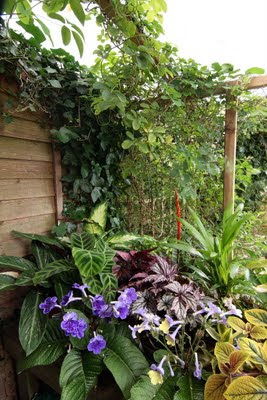 I've restricted my spending on this.  Virtually all the plants have been bought in sales or at reduced prices.  Currently in residence are two begonias - 'Benichoma' and 'Red Robin', Plectranthus 'Sasha', two bromeliads - Vriesia splendens and Aechmea 'Blue Rain' (I've had this for years), Stromanthe sanguinea, Calathea zebrina, a dieffenbachia, Dypsis lutescens, two streptocarpus - 'Harlequin' and 'Carys' - and a small dracaena.  Reckoning up I've spent no more than £30 on the lot, mostly due to the tactics of large retailers who buy in plants, neglect them and then dispose of them cheaply.

So far they are all thriving.  It may be cooler than they would expect in a house or greenhouse but it's also moist and shaded with free air circulation.  They'll have to come into the house in the Autumn as the nights get cooler but they'll have had their summer holiday out in the fresh air and should be a lot more capable of surviving over the winter as a result.  And, just as importantly, an eyesore has been transformed into a place to visit, not avoid.

There is still room for more plants.  The sheltered, shady back wall is prime real estate for something exotic that will enjoy those conditions.  Lapageria springs to mind - but plants are expensive.  I may have to bite the bullet on that one - or find an alternative.
Posted by Trainer John at 3:58 PM