I have been overrun by the hordes of Lucifer...

Crocosmia 'Lucifer' that is.  Bright scarlet flowers have opened all over the garden.  Individually they have a strange seduction.  Collectively, they are becoming a little overwhelming.  You see this... 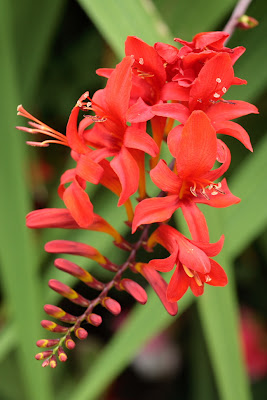 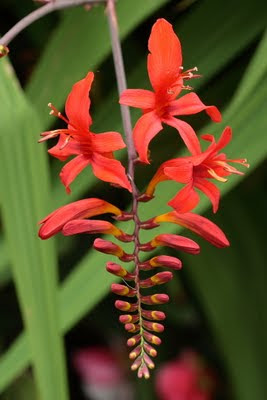 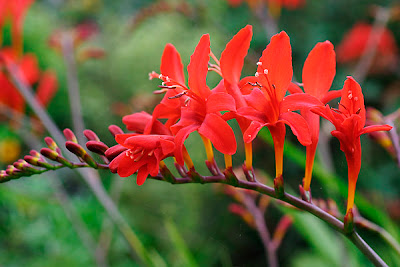 ...and the attraction is obvious.  But when everywhere you look has the same, almost predatory, scarlet blooms unfurling as the individual flowers progressively open along the length of the heads then the time has come to be a bit ruthless.  I don't have a spacious garden and, with five big patches spread between both front and rear gardens some of them have to go.

Not all.  I'd miss this planting in the front garden where the drooping, pleated, sword like leaves of the crocosmia are mirrored by the lower fronds of a small Trachycarpus fortunei growing at the back of the border. 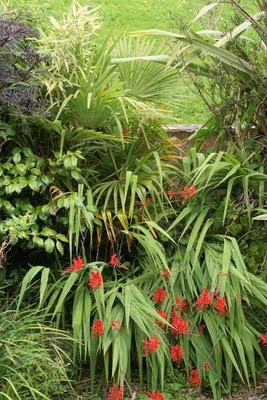 And I'll leave a bit in the rear garden to provide bright colour for the month of July.  But most will go.  I'll dig up the corms once they begin to die back in autumn and pass them on to other gardeners.  They should have more success with freshly dug plants than the dried out husks that pass for bargain crocosmia in the various DIY sheds that infest the UK.  It won't even take long for success or failure to be evident.  They start in growth very early in the year, building up clumps of attractive foliage over the spring and early summer for their mid summer floral display at the 100 - 150cm level.

With me they are bone hardy despite their South African origins and parentage as a cross between Crocosmia masonorum and C.paniculata.  Too hardy to be honest.  Which is why I have far too many - and all deriving from a handful of corms sourced from my parent's garden years ago.
Posted by Trainer John at 11:08 PM