In praise of hardy maidenhair

Ferns, that is.  Species and varieties of Adiantum.  Most gardeners will be familiar with the maidenhairs sold as houseplants - mostly varieties of Adiantum cuneatum or A.raddianum - and may even have tried one outside in a shady spot to add a touch of tropical grace.  For they do look definitely tropical in appearance, lacy, triangular fronds intricately cut into smaller pinnules, a beautiful contrast to other houseplants or orchids.  However, although they may survive a summer they wither at the first touch of even light frost and are most unlikely to return after even the mildest of UK winters.

Fortunately, two species are hardier alternatives with much of the look and feel of these tropical species.  Adiantum capillis-veneris is the closest in appearance - but also the most tender.  Even so, it can be found growing wild in Britain, the southern states of the US and parts of Europe in suitable moist, sheltered spots, often where water drips through limestone rocks to provide the constant humidity it needs.  I photographed these hanging from the roof of the old lime kilns at Cotehele Quay on the Tamar, the river that forms the boundary between Devon and Cornwall.


Sheltered from frost and sun, continually moist, these lovely ferns have responded by forming hanging traceries that cover most of the ceilings of the old kilns.  I have to confess that every time I see these I'm envious of their obvious ability to thrive - although the inner gardener is also tempted to smuggle in a ladder and get the secateurs out to snip off the old, dead fronds.

I haven't (yet) tried to grow this one in my own garden.  They are frost tender but will usually come back from the roots after a not too harsh winter.  However, they are happiest when their feet are in a moist but perfectly drained growing medium and there is constant moisture in the air - as would be found round any constantly running water such as a fountain or water feature - and I don't have one of those.

Instead I grow the far tougher Adiantum venustum, which ranges through the Himalayas and is hardy to far more frost than even the UK experienced last winter.  Mine stayed evergreen in a sheltered spot in my front garden at temperatures of about -5C.  At lower temperatures, particularly if they persist, it will defoliate but regrows in early spring (late February with me) as though the winter had never been.

This is a slow spreader - but not that slow.  I put my plant in a spot at the base of my front garden terraces - log roll to terrace a small sloping bank - in the shade of the house wall.  The soil isn't brilliant but it's thrived in the moist shade.  It was this size in August 2006:

And this size this evening:

Not bad for something that looks so delicate.  In fact I need to start removing some of the rhizomes that allow it to spread so well before it swamps some smaller plants.

I'll leave you with a close up photo of a frond.  Bone hardy, but with all the grace of its tropical cousins, this one's a keeper. 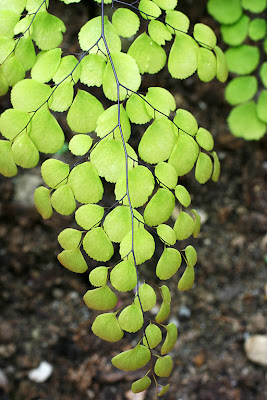