Every picture tells a story, don't it* 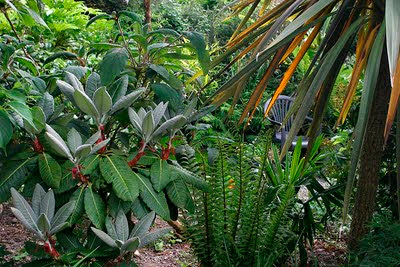 I took the shot to illustrate how well my Rhododendron macabeanum seedling (left) was growing.  Although it only puts on a single flush of growth every year it was doing quite nicely and building into a respectably sized, large leaved shrub.  Alongside is Dryopteris affinis, enjoying the shelter of Cordyline 'Coffee Cream' (right).

Ignore the unfortunate piece of plastic garden furniture in the background.  This has now passed onto the great tip in the sky.  The important detail is the tiny fronds of a very young Trachycarpus fortunei, half hidden by the fern.

It's often said that palms can't grow in the UK climate.  Then, when the evidence that Trachycarpus fortunei and Chaemerops humilis are both virtually hardy in our climate is provided, the statement comes that there is no way that they can grow fast.  We have very cool summers, after all.


Not too bad a growth rate.  As for the other plants in the original shot, well, unfortunately, last winter reduced the Rhododendron macabeaunum seedling to a single lower branch, the rest of the top growth being destroyed by frost.  The cordyline had heavy damage but is recovering.  Even the native fern, Dryopteris affinis, suffered and will take another year to recover.

Every picture tells a story, don't it.

*with apologies to Rod Stewart/Ronnie Wood whose song title I have so shamelessly stolen.
Posted by Trainer John at 10:39 PM