In my last post I mentioned that I was a couple of days away from Hedychium gardnerianum flowering.  It's now fully out - and looking spectacular.

Kahili ginger, from the Himalayas in India, Nepal and Bhutan, has got to be one of the most exotic hardy(ish) perennial plants that can be grown in UK gardens.  It's not quite as tough as H.coccineum 'Tara' that I illustrated in the last post but the flower spike is twice the size.  Longer and far fatter, it makes an even greater impact in the September garden.  As part of my exotic theme I've grown it for a number of years, feared I'd lost it in some recent bad winters, but it's always come back but not always flowered.  This year has been an exception.  The mild conditions last winter allowed the pseudostems and their broad, glaucous leaves to overwinter.  That triggers better growth in the new stems and one has now come to full development.

I grow mine in a pot to give a better chance of flowering.  It also allows me to protect the plant if winter does get harsh.  All of which means I can move it around if needed.  Currently it's close by my plant of Ensete ventricosum 'Maurelii'.  Together they make a fantastic combination.

A broader view includes Hedychium greenii.  My plant of Chaemerops humilis sits below Acca sellowiana and Phyllostachys nigra in the background.

Get closer to the plant - but only in the evening - and the sweet scent that is designed to attract night flying moths hits from feet away. 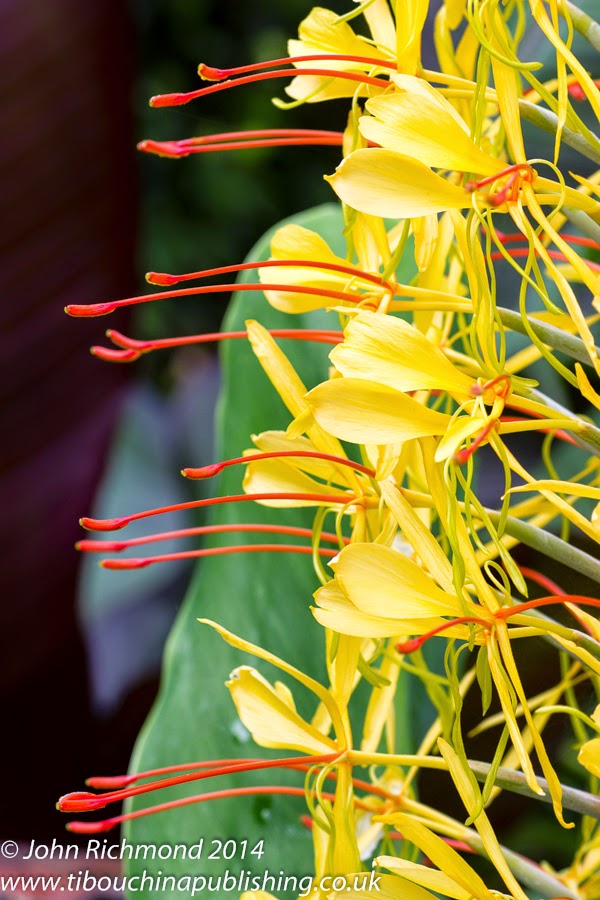 Hardiness is a relative thing, of course.  This ginger is certainly root - well, rhizome - hardy through most of lowland UK, particulalrly if well mulched.  The evergreen top growth isn't hardy except in very mild winters - but new growth will certainly come from the fat rhizomes by the end of May.  The race is then on to produce flowers before winter sets in.  Good weather this year has allowed growth - and the result has been glorious.