I have a fondness for Spring season plants that appear quickly, flower profusely midst attractive foliage and then, their duties done, disappear for the rest of the year.  The little UK native wood anemone is a typical example.  The native form of Anemone nemorosa has been popping up in local woods and some hedgerows for about three weeks now.  Another few weeks and it will have disappeared again.  Forming slowly spreading low carpets it is an ideal plant for positions in deciduous shade, relishing the spring sunshine followed by cool summer shadow.  I've had a small patch in my front garden ever since I first moved here.  It spreads slowly by means of underground rhizomes, so every year it's a little bigger and more floriferous.

Over the years a number of sports have shown up in wild populations, particularly in western parts of the UK and in Ireland.  I'm not a collector but I've found room for a few - well, they don't take up much space!

A number of white double forms are known but I particularly like 'Vestal' with its tight central boss and standard six outer petals.  Small but perfectly formed.

Over the years varieties in shades of blue have been introduced to cultivation.  My original purchase of A.n.caerulea proved pretty enough but is quite a pale, milky blue.  A.n.'Robinsoniana' is a distinct improvement in intensity of colour.


Also available if you are prepared to search are forms with red tinged flowers and even a green form, 'Virescens'.  I grow neither of these but may, if I come across them one day, indulge myself. 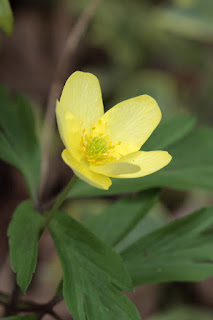 The one colour that is missing is yellow.  For that you need the closely related North American species Anemone ranunculoides.  Just as easy as the UK native and with the same ferny foliage this one is spreading adjacent to my original patch of A.nemorosa in my front garden.  The two species do cross but I haven't noticed any hybrid seedlings cropping up.  Not that I'd know without detailed examination - the yellow colour seems to be dominant.

All of these are charming, ephemeral little woodland carpeters.  And at least I can grow them, unlike my adventures with snowdrops.
Posted by Trainer John at 2:10 PM