On Gardening and Greyhounds

Pippa, my hole digging greyhound, passed her 10th birthday a month ago.  For a big dog that's often a ripe old age - but greyhounds are different.  Supreme athletes, they live longer than other dogs of comparable size and weight.  She's still extremely fit and healthy (far fitter than me!) and could well live till 14 or more. So, more holes to come!

She's the second rescued ex racing greyhound to live here.  Our first was Sky, a handsome black boy of unknown age when Maria fell in love with him at a local rescue kennel in 1996.  He lived for another 8 years so was probably about 14 when he finally succumbed to old age.  Pippa joined the household in January 2006 to replace our old, recently deceased whippet and provide some company for our daughter's Jack Russell puppy.

There are two questions I'm always asked about her (and about Sky previously).  The first question is always "do you race her/him/it?" Depending on the audience I either explain that she's retired from racing or, if I'm feeling facetious, "I used to, but she always beats me and it's sooooo discouraging."  The second question is "how can you have such a big dog in a small garden without her wrecking it?"  And in the answer to that question lies my love of greyhounds.

I've known sighthounds - whippets, greyhounds, salukis, lurchers and others - all my adult life.  My parents owned, bred and showed the Whitgift Whippets and Manchester Terriers.  I've spent many a happy hour at shows - and even happier hours watching them do what they most love.  Run.  Fast.  So I certainly didn't object when Maria fell  in love with Sky.  He'd make a good companion to the little whippet bitch she'd just bought me to celebrate our moving in to the current house and garden.  He did, and from that point on I added greyhounds to my list of most loved dogs.

There are a lot of misconceptions about greyhounds.  "They're running dogs so they must need a lot of exercise.  They all wear muzzles so they must be viscious.  They're disobedient.  They're stupid."  I've heard them all.  None are true.

This is their preferred position: 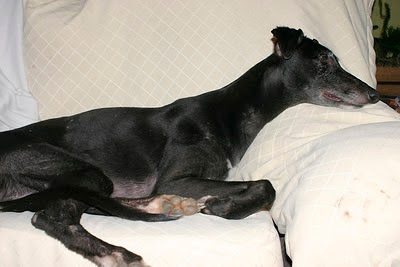 Greyhounds will happily spend 21 out of 24 hours resting or asleep.  Pippa is no exception.  She spends the other 3 hours as follows:

Which leaves 1 minute out of her busy day.  Digging time (averaged over a month).

No time allocated for guard duties?  Greyhounds don't guard.  Visitors are either totally ignored or treated as members of the family.

Not much time in there for wrecking a garden - as long as I can stop her digging.  For the vast majority of time she's content to wander about and do no harm at all.  Yes she relieves herself but I've no lawn so that's not a problem.

She wears a racing muzzle when out.  Not because of any manic or homicidal tendencies but to protect the local wildlife.  Greyhounds have an overwhelming prey drive - and can spot a squirrel, rabbit, cat or one of the local deer hundreds of yards away.  They will always chase.  The muzzles are to ensure that, should when they catch up with anything, they don't kill it.  Pippa is well trained and will always come back to us - but only after the chase, not during.  It's one of the pitfalls of owning high speed hunters.  All sighthounds are the same.  But it does mean my garden was cat free within weeks of her arriving.  Word soon got around the local feline population that my garden had a very fast dog in residence.

Greyhounds are often described as stupid.  They are not as trainable as the likes of sheepdogs or gundogs, I'll freely admit, but it was so easy to house train her and teach her to respect the garden (the odd digging episode apart).  Natural idleness helps.  They walk beautifully on a lead.  And they are bright enough not to chase garden birds, something many dogs never manage.  They know they fly away - so they just ignore them.

In other words the perfect dog for a busy gardener.  Gentle, affectionate, no guarding tendencies to wear trampled paths along the boundary edges, and, providing they get their daily run, a general indolence that makes sloths look hyperactive.  That's how I can have a big dog in a small garden and still grow a lot of interesting plants.

Now the final bit.  Would I want to be re-incarnated as a greyhound?  No.  To the racing fraternity they are commodities.  If they don't make the grade they're out.  Retirement is often at 4 or less.  And retirement often means euthanasia - or abandonment.  Any rescue kennel will have it's complement of ex-racing greyhounds - and not all will enjoy Pippa's fate. 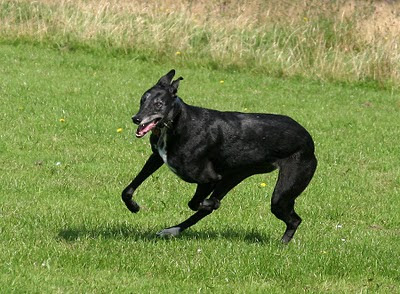